The Kissing Bug by Daniel Scott Buck with Illustrations by Evan B. Harris 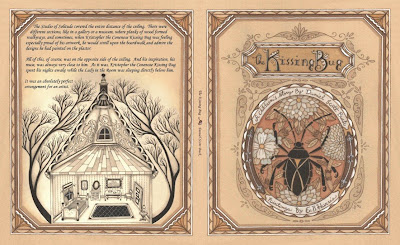 Read Susan Tomaselli's review of The Kissing Bug at 3:AM Magazine.

In the tradition of Roald Dahl's James and the Giant Peach, Tim Burton's The Melancholy Death of Oyster Boy, and the eerie Victorian tales of Edward Gorey, comes a dark yet tender story for children and adults.

During the dreary era of the first world war, on an old country farm, there exists a kingdom of the creepiest, nastiest, and strangest of bugs called kissing bugs . . . also known as assassin bugs. They are militant, paranoid insects that enjoy drinking blood from plump caterpillars, baby spiders, and even human lips and eyelids. All of them except for Kristopher, a bohemian among the kissing bugs, who only takes the blood of caterpillars to paint pictures of the woman he loves. The other bugs must never know that Kristopher is in love with a human woman, it is his most guarded secret, especially once they go to war with every creature who doesnt follow the Kissing Bug Way.

Featuring Leyenda the gossipy ladybug, Klondyke the fat greedy sycophant, Booty the batty old balloonist who makes her balloons out of the skins of caterpillars, and General Khevron the sadistic warmonger whose instruments of torture can force his enemies to confess to just about anything.

The Kissing Bug is as bleak and disquieting as it is charming and whimsical. An allegorical tale that will likely endure for many generations to come.

Buy the book at Amazon.

Buy the book at Powell's.

Buy the book at Barnes & Noble.
Posted by Daniel Scott Buck at 6:32 PM